The 9/11, 2001 terrorist attacks in the US indicated that terrorists could use any possible means to achieve their goals. Since then, terrorism using weapons of mass destruction (nuclear, chemical and biological weapons) has been recognized as a genuine threat and countermeasures have become an urgent issue.

Under such growing international tension, the G8 leaders launched the “G8 Global Partnership against the Spread of Weapons and Materials of Mass Destruction” (G8GP) at the G8 summit in Kananaskis, Canada in June 2002. In this framework, the G8 countries agreed that GP’s initial priorities lay in Russia because it possessed what was by far the largest inventory of weapons and materials, and determined its priority areas for the disposal of chemical weapons, dismantling of decommissioned nuclear submarines, disposal of fissile materials, and redirection of former weapon scientists.

The G8 countries were encouraged to raise up to 20 billion dollars to address the WMD challenge by 2012 and Japan committed 200 million dollars. 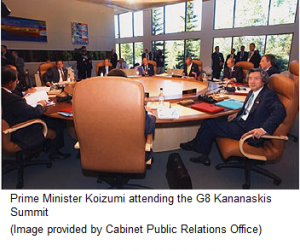 In May 2011, the G8GP activity since its launch was reviewed at the G8 summit in Deauville, France, and concrete achievements in dismantling decommissioned Russian nuclear submarines were highly appreciated. In recognition of the valuable role of the G8GP and remaining challenges in the WMD non-proliferation, the G8 decided to extend the initiative beyond the initially agreed period, encouraging expansion of membership.

Since 2014, the G8 has become the G7 without Russia, and the G8GP was renamed the Global Partnership Against the Spread of Weapons and Materials of Mass Destruction (with up to 30 partners and the EU as of January 2021).

In terms of nuclear disarmament and non-proliferation and the environmental protection of the Sea of Japan, Japan implemented its cooperation program for dismantling decommissioned nuclear submarines in the Russian Far East. From 2003 through 2009, a total of six decommissioned submarines were dismantled in cooperation with other countries (see here).

Japan has also provided the equipment (floating dock, cranes, and tugboat) necessary for safe storage of the Reactor Compartment units of the nuclear submarines,
which remain highly radioactive even after dismantling (see here ).

In Ukraine, Kazakhstan and Belarus, Japan’s cooperation had been focused on strengthening nuclear security and preventing illicit trafficking in nuclear and other radioactive materials across borders (see Ukraine / Kazakhstan / Belarus ).