Since 9/11 terrorist attacks, terrorism using WMD by non-state actors such as terrorist organizations has become a real threat to the international community (see here ). Among WMD terrorism, IAEA assumes the following four types to be feasible nuclear terrorism.

In a nutshell, “Nuclear Security” encompasses multifaceted countermeasures to prevent nuclear terrorism. It covers not only the physical protection of nuclear facilities and materials, but also the security of non-nuclear radioactive sources, import-export controls at national borders and so on. 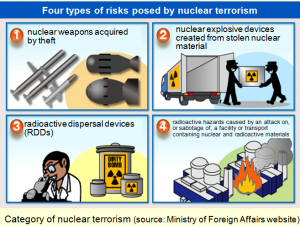 Needless to say, each individual country has primary responsibility for its own nuclear security. However, the impact of nuclear security incidents could easily spread beyond national borders. Therefore, intensive cooperation at regional and international levels is of vital importance for robust nuclear security.

In Prague in April 2009, US President Obama emphasized the importance of strengthening international nuclear security to prevent nuclear terrorism in his speech on “a world without nuclear weapons”, and hosted the 1st Nuclear Security Summit in Washington, DC(US) in April 2010.

The 2nd Nuclear Security Summit was held in Seoul in March 2012, the 3rd in The Hague (Netherlands) in March 2014, and the 4th and Final Summit in Washington, DC in March 2016, and subsequently, international conferences on nuclear security have been held by the IAEA.

Through a series of summits, awareness of the threat of nuclear terrorism has been raised and nuclear security measures have been strengthened not only at the national level but also at the regional and global levels.